The Decade of the Gun: JFK to KSU Part 1

Friday, Nov. 22, 1963, 12:30 in the afternoon, I’m in eighth grade gym class at Memorial School in Totowa, N.J. The gym at Memorial School was in the basement and had a low ceiling, so none of us were developing good jump shots. It was Friday, so we were probably playing dodge ball. Don’t remember for sure. But I remember the announcement that came over the PA system. President Kennedy had been shot. Our gym teacher didn’t know what to say. He just told us to go back to the locker room, get dressed and go home. 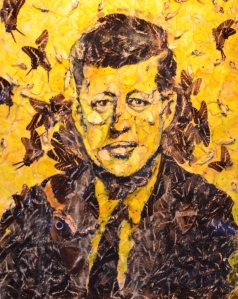 Both of my parents worked so there was no one home in the middle of the day. I headed to my favorite hangout, Elsie’s Sweet Shop on Union Boulevard. I walked in and saw the class tough guy sitting at the counter crying. That’s when the meaning of what just happened struck me.

The U.S. shut down for a few days after JFK’s assassination. My family sat in front of the TV during that time. I wasn’t a novice when it came to seeing violence on TV. I watched The Untouchables every Thursday night. But I wasn’t prepared for what I was to see on Sunday, Nov. 24. As we sat in the living room waiting for a glance at the scoundrel who shot JFK we saw strip club owner Jack Ruby step forward and shoot him. I think that was the only time I’ve ever seen someone shot live on television.

My family didn’t have any conspiracy theories to explain this. We didn’t know at the time who Jack Ruby was. We just assumed he was an outraged American out to administer some Texas justice.

The decade of the 60’s is remembered for a lot of things. It was the decade of sex, drugs and rock and roll. For some it was a time for coming out, for others a time for liberation. The top results of a USPS survey in the 90’s about what would best “commemorate” the 60’s identified the top memories as the Beatles, Woodstock and Star Trek.

For me the 60’s was the decade of the gun. Two of the most memorable and most profound “where were you when” moments in my life were the assassination of JFK and the killing of four students at Kent State while I was going to school there. While not chronologically exact, these two events framed the decade in my mind.

May 15, 1970. Mississippi state police open fire on Jackson State University students during a protest of the Cambodian offensive, killing two and wounding 12.

And that says nothing of the civil rights workers and demonstrators killed by rednecks posing as law enforcement. James Chaney, Andrew Goodman and Michael Schwerner, on June 21, 1964, were arrested in Mississippi while working to register black voters and were later turned over to Ku Klux Klansmen, led by Edgar Ray Killen, a part-time minister and sawmill operator, who murdered them. Nor did I mention here the 58,000 Americans killed in Vietnam.

The End of Optimism

The decade got off to an optimistic start. For most it was a time of prosperity. In 1960 most of us had a car, a refrigerator, a TV, a washing machine and a dryer. The GI bill benefits sent many of our parents to college and many more were able to buy a home in the suburbs. The first wave of baby boomers was on the verge of becoming teenagers.

The election of John F. Kennedy in 1960 signaled not just a change of party in the White House but an emergence from a decade of Cold War paranoia and stifling mores. We hadn’t seen a relatively young man with an attractive, fashionable wife move into the White House. And a Catholic at that. Viewed from a time after we elected a black president, electing a Catholic may not seem like much of a milestone, but JFK was the first.

The Democratic Platform for the 1960 election promised a “New Frontier.” Minimum wages would go up, a national health insurance plan for the elderly was promised as was civil rights legislation. The vision included improving conditions for all workers and launching a campaign to eliminate urban slums.

In reality little of this happened during Kennedy’s aborted term. It was not the popular and dynamic JFK that delivered on these promises but rather his decidedly unpopular and untrustworthy successor LBJ. It was Johnson who signed into law the Civil Rights Act and the Voting Rights Act and it was his administration that created Medicare and Medicaid.

So while JFK may well have been more style than substance, he was nonetheless a powerful symbol of the new decade. And it was the bullet that killed him in 1963 that made it clear that the 60’s weren’t going to turn out to be what we had expected and hoped for.

Part 2 is about what went wrong.

20 Responses to The Decade of the Gun: JFK to KSU Part 1