Growing Up in the 50’s: The Night Two Guys Burned Down

What were the most important events of the 1950’s? Maybe the Korean War, the Soviets launching Sputnik, or the Cuban Revolution. But for me none of those events made much of an impression. I was born on the last day of 1949 so the 50’s were the first decade of my life and I may not have been at the top of my game as far as world events go.

For me one event eclipsed all others. The night Two Guys burned down. Where was I when this life-changing event took place? I was sitting in the parking lot watching.

Two Guys was short for Two Guys from Harrison, although I believe they eventually came to be headquartered in Newark. They had a few stores but for me there was only one, in Totowa. Two Guys was a department store. You could buy clothes, records, footballs, paintings, TV’s, virtually anything. This was before New Jersey had a megamall every 10 miles so a department store was pretty cool. 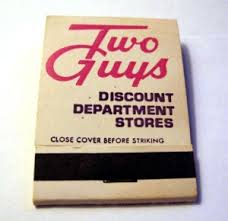 The Totowa store was a long narrow one-story building. My strategy for a Two Guys visit was to enter the last entrance at the back of the store and walk the length of the store which brought me through every department. My usual stops were sporting goods and records (45’s and albums). The front of the store was mostly clothes which held little interest for me other than the occasional sports jersey.

The Two Guys parking lot was also the setting for the carnival in Totowa. The carnival was a week long affair and I spent every night of the week there along with most of the other kids in Totowa who were old enough to go out alone at night (in the 50’s that meant being 8 or 9).

Sadly, my mom worked nights in the Two Guys cafeteria as a cashier for a little while. I say sadly because she was grossly underemployed and proved it later in life when she became the owner of a successful insurance agency business. But she also was limited by the cultural norms of the times, mothers stayed home with their children and fathers were the primary bread winners. The fact that my mother worked at all was something of an insult to dad’s masculinity.

I don’t know how we found out about the Two Guys fire. There was no Internet and no cable TV. It certainly wasn’t on one of the five or six New York TV stations that we pulled in with our rooftop antenna and we hardly ever listened to radio. Perhaps my grandparents, who entertained themselves by listening to a police radio, heard about it and called.

However we found out, as soon as my father got the word he sprung into action. Within minutes we were all in the car, me in pajamas, and headed for a prime spot in the Two Guys parking lot to watch the fire.

Two Guys burned to the ground. It was eventually rebuilt and remained a favorite shopping spot in Passaic County for another 10 or 20 years.

Like Loading...
This entry was posted in Growing Up in the 50s and tagged 50's, Two Guys. Bookmark the permalink.

13 Responses to Growing Up in the 50’s: The Night Two Guys Burned Down