The Future of Food

Do you think you’d enjoy a steak more if you knew it was produced in a lab rather than coming from a cow? How about with a side of vegetables grown in your own kitchen? Or maybe you’d rather just call out for pizza. Would it taste better if it was made on the truck while it was on the way to your house?

These are just of few of the things mentioned at this week’s Techonomy NYC session on technology and the future of food. Zoe Leavitt, an analyst with CB Insights, framed the discussion by noting that while we need more food to feed what is a growing global population, 40% of the food grown and harvested in the U.S. gets thrown out. To address this and the growing challenge of climate change Leavitt said we need to look at creating new products, utilizing new agricultural strategies and being smarter about how food is distributed.

All of the things mentioned above are more than just ideas, there are startups working to make each of these a reality. And there were some even wilder ideas discussed. Like having a 3D printer in your home that gathers data from all the sensors in places like your refrigerator and your bathroom and then prints a personalized dietary supplement.

Here are some of the startup technology companies that are bidding to influence the future of food:

This company is up and running, operating vertical, indoor farms. They are headquartered in Newark, N.J., where they have occupied an old steel mill and converted it to a farm that harvests up to 2 million pounds of produce a year. David Rosenberg, CEO, was at the Techonomy conference. He noted that the “Dream Greens” produced in Newark use 95% less water, zero pesticides and produce fresh food 365 days a year.  Their growing cycle is much faster than traditional farms allowing them to be more productive as well as providing the obvious benefit of cutting down on land usage.

Grove Labs is a five-year old company that focuses on what it calls hyper-local agriculture, like grown in your house. They have built an ecosystem that allows you to grow your own food in your kitchen, what CEO Gabe Blanchett called the “living kitchen.” He also suggested that this type of indoor agriculture could be used by restaurants or schools. A look at Grove’s Facebook posts show homegrown cherry tomatoes, greens, chard and all kinds of flowers. While Grove has marketed its own hydroponic farming systems it also produces pods to be used with devices produced by appliance and furniture manufacturers.

This is the company that is working on producing meat that doesn’t involve killing any animals They are doing this by producing meat directly from animal cells. On their web site they claim to have made beef, chicken and duck. They have also produced a lab grown meatball, although the cost at this stage is prohibitive. Bill Gates and Richard Branson are among Memphis Meats’ investors. Their goal: meat that is “good for people, animals and the planet.”

Here’s another company that is in the business of creating lab produced meat. They say “we don’t think one animal needs to be harmed to feed another.” They use animal proteins in a process that they compare to craft brewing. The benefits: conserves land, water and energy; no animal needs be slaughtered; and pets get cleaner, heathier food.

Same goes for fish. This is the ultimate sustainable seafood since no fish ever has to get pulled out of the ocean.  Like the lab meat makers this involves the use of cells. The cells are incubated into tissue and “harvested.” In addition to saving the fish in the ocean, this method promises to control mercury content and avoids some of the contaminants that have been associated with fish farms. They are not yet ready to produce filets, their first public tasting involved “carp croquettes.”

Robot-made pizza. They guys are up and running in Mountain View, Calif. You can go to their web site and use their app and order a pizza, at least if you’re in Silicon Valley you can. By making the pizzas with machines rather than humans, Zume can produce 370 pizzas an hour at their plant. The fast production means delivery takes 5-20 minutes. There is still a bit of human involvement, like sprinking toppings on the pizza and placing the finished product into the automatic slicers. But most of the work is done by robots like Marta the sauce spreader and Vincenzo, the bag of nuts and bolts that puts it in the oven. 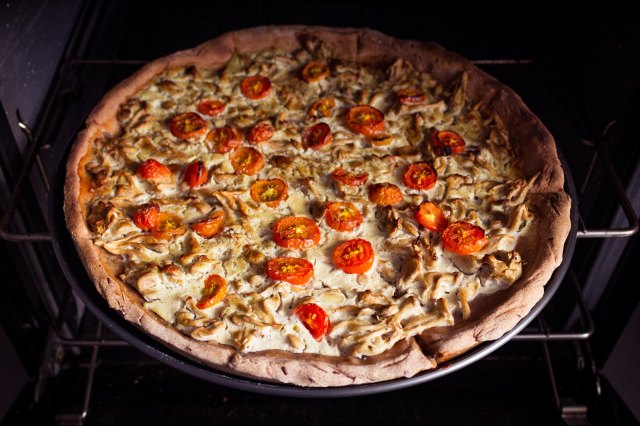 15 Responses to The Future of Food