In 1932 a 10,000-seat Art Deco stadium made of concrete opened on a hill overlooking the Great Falls.

Eighty some odd years later a volunteer crew of 500 teenagers from Paterson’s high schools used 500 gallons of white paint donated by Valspar to try and give the decaying structure a facelift.

The view from center field.

Hinchliffe Stadium is steeped in history, not just the history of Paterson, but the history of America. Paterson was America’s first industrial city, the brainchild of Alexander Hamilton. In this blue collar town, the public funding that financed Hinchliffe as part of the New Deal provided jobs for laid-off millworkers. 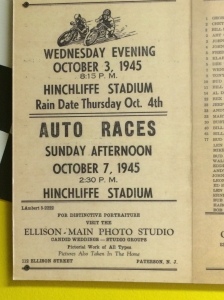 The 1930’s and 40’s were the heyday of the Negro Baseball Leagues. Hinchliffe is one of the few remaining stadiums that hosted these games. It was home to the New York Black Yankees and the New York Cubans. (Thus starting a continuing tradition of New Jersey-based sports teams calling themselves New York.) The Cubans included the first Dominican players to play professionally in the U.S. In 1933 Paterson hosted the Colored Championship of the Nation.

Hinchliffe was also a stage for Paterson’s favorite sons. Larry Doby, who was to become the first black player in the American League when he was signed by the Cleveland Indians, ran the base paths at Hinchliffe. Doby, a future Hall of Famer, was a product of Eastside High School. Lou Costello, born and raised in Paterson, appeared at Hinchliffe numerous times in the 40’s with his comedic partner Bud Abbott. One can only assume that they did their famous “Who’s On First” routine right here in the ballpark.

Future Hall of Famer Larry Doby was a product of Eastside High. 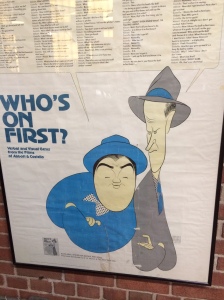 Patersonian Lou Costello and his partner Bud Abbott played Hincliffe in the 40’s.

In 1963 the stadium was sold by the city to the Board of Education for $1. It is still owned by the board of ed. It was a welcome home for Paterson’s high school athletes for decades but as urban schools declined in the 80’s and 90’s, that decline was apparent in the condition of the stadium. With no funds available to maintain the facility it eventually shutdown in 1997.

My memories of Hinchliffe may not be quite as historically significant. From 1932 until the last game on Nov. 28, 1996, Hinchliffe was the site of the Central vs. Eastside high school football game. My dad took be there a couple times in the 50’s. I don’t remember much about the games themselves but I remember the electric atmosphere and the packed stadium. It was as if the rest of the city shutdown for these two hours while all eyes were focused on Hinchliffe.

My father was a graduate of Central (later replaced by Kennedy High on the west side). He was a member of the band so he was part of the Thanksgiving tradition at the stadium.

My other memory of Hinchliffe is very different. In 1988 I did the PR for a new professional soccer team, the Cosmopolitan Eagles, who played in the American Soccer League and called Hinchliffe home. This was a time when there was no real professional soccer in the U.S. The NASL had folded and MLS was yet to be formed. With the Eagles we used the term “professional” loosely. I remember a game where we had our eye on the gate to see if there were any decent players we knew coming through the turnstile so we could redirect to the locker room and equip them with a uniform. I enjoyed having the run of the historic stadium and it was still at that time fully functional.

The potential was there if it was done right. We hosted Millionarios from Colombia one weekend and put a few thousand people in the old stadium. The Eagles, later renamed the New Jersey Eagles, lasted two years at Hinchliffe before moving to Cochrane Stadium in Jersey City where they survived for another couple years. 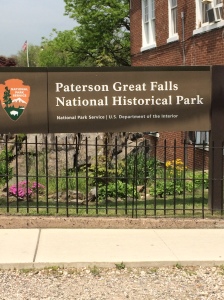 If you drive through Paterson these days you’re likely to see the banners heralding Hinchliffe as “Paterson’s Field of Dreams.” The city has committed to put some funds into its survival. The stadium was recently named a National Historic Landmark and there is a bill before Congress to make it part of the Great Falls National Historical Park. Those designations make some more funds available. And there is a grassroots group called “Friends of Hinchliffe” working to raise the money to revive the facility. I took a look at their Web site and made a donation.

4 Responses to This is Hinchliffe