A Tale of Two Cities

Detroit and Newark. Cities that didn’t bounce back.

Bounce back from what? From a downward spiral that is often dated as starting with the urban unrest of the 1960’s. From white flight and middle class flight and jobs flight. From declining populations and increasing concentrations of poverty. From lending and housing policies that created de facto segregation even at a time when legal segregation was being irradicated. From deteriorating school systems. From thugs and drugs.

That litany of ills beset most industrial cities in the northeast and midwest. But Newark and Detroit added some of their own special problems. Detroit was dependent on the auto industry with its periodic bouts of decline and desertion. Newark has a record of corruption that would make a Mafia family blush.

There are all sorts of parellels in the story of these two cities:

I recently read two books about these cities: Inside Newark: Decline, Rebellion, and the Search for Transformation, by Robert Curvin; and Detroit: An American Autopsy, by Charlie LeDuff. These are insider views of what has happened in these cities. Curvin’s work is about the governance of Newark and the people who ran the city either in City Hall, in civic organizations or as local power brokers. LeDuff provides an insider view of the mean streets of the Motor City.

I’ve only been to Detroit a couple times. On the other hand, I live near Newark, go there a lot and find it to be a greatly under-appreciated city. It has a world class concert hall and hockey arena. There is a great museum and some beautiful historic architecture. On weekend nights, thousands of people from the surrounding area come to the Ironbound section for its Portuguese and Spanish restaurants. I suspect much the same thing happens in Greektown in Detroit.

But you wonder whether that stuff provides any benefit to the people who have either stuck it out or just can’t get out of these cities. LeDuff says of Detroit, “The fundamentals are no longer there to make the good life.” I hope that isn’t entirely true and if it is, that it won’t continue to be. Reading these books is about rooting for the underdog.

Inside Newark: Decline, Rebellion, and the Search for Transformation, by Robert Curvin

Robert Curvin was a civil rights leader in Newark and has spent many decades in and around various government and civic organizations in the city. Inside Newark is first and foremost a history of Newark politics since the 50’s. It is an insider’s view. Sometimes that amounts to naming the names of many and describing their roles in various acronym named organizations. That can be tedious reading for the non-insider.

But what is really interesting about this work is getting an insider’s view of Newark’s big personalities. That is something Newark has never had a shortage of. Curvin has lots to say about the mayors, Hugh Addonizio, Kenneth Gibson, Sharpe James and Cory Booker; the political bosses like Steve Adubato and the activists like Amiri Baraka.

I love the stories about Sharpe James in particular. There’s the one about the day when “wearing a straw hat, bicycle shorts, and a tight tank top, he rode a bicycle into City Hall. Carrying his reelection petitions, he looked more like a circus clown than the chief executive of a major city.” This is a guy who upon being imprisoned for various incidences of corruption considered himself a political prisoner and placed himself in the ranks of Gandhi, Martin Luther King, Jr., and Nelson Mandela.

And who knew that Cory Booker once prayed at the gravesite of Lubavitcher leader Menachem Schneerson? Curvin is not a fan of Booker. He characterizes him as someone who as mayor was far more interested in his media persona and national reputation than he was in the people of Newark. There must be something in the water in New Jersey because we have a governor with that problem as well.

Curwin offers some insights into how Newark got to be where it is. There are the usual problems for post-industrial American cities. Issues like crappy schools, limited employment opportunities and substandard housing. But there are also problems that are unique to Newark. One is its relatively small size for a big city, 25 square miles. That has led to a higher concentration of poverty. The tree lined middle class enclaves on what would be the outskirts of town have long since been separated out as different towns.

Another is Newark’s legacy for what amounts to perpetual corruption. Two of the four mayors who preceded Ras Baraka went to jail. One was white, Addonizio, one was black, James. Payola and patronage are indeed colorblind in Newark. Of the two who didn’t end up in jail, Gibson was brought up on bribery and tax evasion charges (ending in a hung jury), and Booker’s first chief of staff was caught taking bribes to fix demolition contracts.

As a frequent visitor to Newark, I like to think the city is on the upswing. So it was depressing to read the chapter about how many times the city has been cited as being on the road to recovery when in fact it wasn’t. Curvin ends the book by proposing an agenda for the city’s leaders. Some good ideas, but overall I’m not convinced. 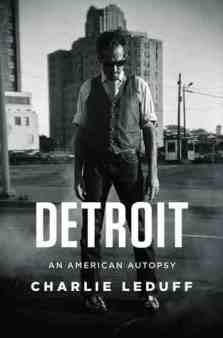 Charlie LeDuff left a job with the New York Times to head home to Detroit. There he takes up a reporter position with the Detroit News, the kind of dying paper where they don’t have the money to replace the light bulbs when they burn out.

Deduff’s beat is crime, corruption and general decrepitude. He rides along with the city’s firemen with their worn out gear and broken down equipment. He buddies up with homicide detectives whose case load leaves them scant chance of success. He spends time on the factory floor with his brother, a guy who tries to pull his own tooth out with a pair of pliers because he doesn’t get dental insurance.

LeDuff’s tales are full of death. The death of innocent people and particularly children, caused mainly by the fact that they live in Detroit. But not all the problems come from thugs and addicts. There’s also the car companies which the livelihood of the city depended upon. Watching the big 3 auto company executives in Washington pleading for money during the recession LeDuff concludes, “Turns out our masters of the universe couldn’t run a grocery store.”

On the lighter side, though equally pathetic, is Detroit city council president Monica Conyers, wife of U.S. Congressmen John Conyers, or as LeDuff states, “the youngish and voluptuous wife of the doddering congressman.” More to the point: “an overfed buffoon who fattened herself at the public trough.” Her political career ended with a bribery conviction.

LeDuff is a terrific writer and this is an interesting book to read. His style is similar to the late New York Times media columnist David Carr. LeDuff’s Detroit sounds a little like Carr’s Minneapolis in his book The Night of the Gun. Couldn’t help wondering if they talked to each other at the Times and what a conversation between LeDuff and Carr might have sounded like. It’d be pretty colorful for sure.

I don’t know much about Detroit. But there no doubt are many people who are working hard to make things better and those people are likely creating pockets of revival and hope. I don’t think they will have much appreciation for this book because it pretty bluntly portrays Detroit as a downright awful place.

LeDuff’s gig at the Detroit News didn’t end with the paper folding as you might expect. Instead it ended with this reaction to having a story about a dodgy judge sandbagged by its editors. “I called my buddy the janitor and had him bring a trash can on wheels up to the newsroom. When he did, I swept the entire contents of my desktop into the garbage can and walked out.”

6 Responses to A Tale of Two Cities