How Teens Won the War Between the Generations

In 1900, nobody used the term teenager. If you were an adolescent boy in Europe, you were likely being prepared for the military. In the U.S., you would be expected to take your part in industry, as in maybe a factory job. And if you were a young girl, most preparation was aimed at marriage.

Seventy-five years later adolescents are now called teenagers. They hang around mostly with each other and set standards among their peers for music, style and behavior. They are, in the words of author Thomas Hine (The Rise and Fall of the American Teenager) “the future in your face.”

Throughout that 75-year period the adult world pretty consistently denounced the outward signs of the emerging teenage world. At the same time, they were forfeiting their influence and authority by screwing up both the peace and the prosperity, problems for which young people bore an inordinate amount of the consequences.

The earliest signs of a self-defined teen culture and style were in the 1920’s. Jazz, dance halls and flappers signaled an interest in the here and now and in having fun over and above any concern with preparing for an adulthood that seemed to matter only to the adults in their lives. And with each iteration of often musically-inspired teen culture, whether it be jazz or swing or rock ‘n’ roll, bobby socks, zoot suits or leather jackets, the adult world was there to greet it with scorn, if not outright panic. It has always been the case that, as Hine writes “teenagers bear an inordinate share of the blame for society’s failures.”

A wary eye was cast on music and dancing and virtually any style that arose from the teen ranks. A non-orthodox appearance was associated with delinquency. We still haven’t gotten over that. But the delinquency was more perception than reality, as, for example, with the emergence of the rock ‘n’ roller. The press and the public bemoaned an associated rise in delinquency, but actual crime statistics suggest there was no real escalation.

Viewed from the perspective of the young, the adult world was rapidly losing credibility, not only because of their ridiculous focus on jazz and zoot suits, but because they were seriously making a mess of the world. All those European boys who were being trained for the military as the 20th century started were likely sacrificed in the brutal and senseless Great War.  Jon Savage, author of Teenage, described it this way: ““In this mass war, millions of adolescents would be involved together in the surrender of their youth, if not their life, a generational holocaust that would have unforeseen and long-lasting consequences.” He adds, “The Great War had forever destroyed the automatic obedience that elders had expected from youth.”

That scene would be replayed in the 40’s with the second World War and in America again in the 60’s in Vietnam where “American youth were expected to pay the highest price for this military adventure although no one could give them a good reason why,” according to Grace Palladino in Teenagers: An American History.

Then there were the adults who ran the economy. In 1929 they brought it down, ushering in a decade of hunger and desperation that for teens meant no money, no food and often no home as their families broke apart. Wall Street was to treat us to another economic debacle blow, albeit a lesser one, decades later as they redeployed their resources to back financial instruments built from sub-prime mortgages.

Even in the relatively good times of the 1920’s in America, young people lost considerable respect for the adult world and their laws thanks to Prohibition, a Constitutional amendment that most Americans didn’t want, didn’t respect and routinely violated. 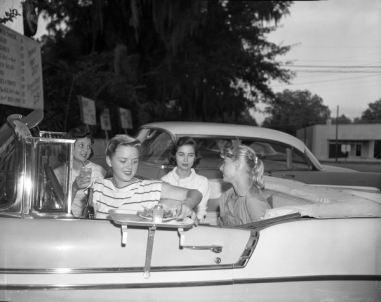 While this was going on, another important factor in the emergence of teens as teens was their increased separation from adults. As high school became commonplace for most American teens, peers replaced parents as sources of influence. The growth of car ownership offered teens some privacy. And during the Second World War, with large numbers of young men conscripted into Europe and Asia, younger teens and girls entered the work force, drew paychecks, and afterwards were no longer willing to return to a dependent or domestic role.

There’s no better example of the growing disconnect between teens and their parents in the 20th century than on the issue of sex. Teen sex was generally denied and denounced by the adult world. That is when they weren’t ignoring the topic altogether. In the meantime, the average age at which teens lost their virginity dropped with each generation.

By the 1970’s, Paladino writes, “The controversial counterculture of sex, drugs and rock ‘n’ roll suggested the generation gap was now unbridgeable.” She adds “Teenagers in the 1970’s had won the battle for freedom that high school students had been waging since the 1930’s.”

Like Loading...
This entry was posted in History, History of Teenagers, Uncategorized and tagged 20th century, adolescents, history, teenagers. Bookmark the permalink.

21 Responses to How Teens Won the War Between the Generations