Theme Parks: The Unusual, the Outrageous and the Outright Awful

A key marketing strategy during the emergence of theme parks in the 1950’s and 1960’s was to bring popular television characters to life. That was the theme behind Disneyland. Among the most popular shows of the era were westerns with cowboy heroes like the Lone Ranger, Roy Rogers and Gene Autry. And also Hoppalong Cassidy, aka William Boyd. An entrepreneur as well as an actor, Boyd tried to capitalize on his movie and TV success by opening Hoppyland in the Los Angeles area in 1951. Typical of the attractions was a pony cart ride around a man-made mountain stocked with goats. And Boyd himself made personal appearances espousing the “Hoppy code of conduct.” That involved drinking milk, eating vegetables and listening to your parents. One can only imagine how that resonated with the teenagers who the family dragged along. Apparently, Hoppyland didn’t resonate that well with anyone and was shuttered after four years.

As the baby boom generation began to graduate from Mickey Mouse Clubhouse, in addition to Westerns they began to watch more mature (slightly) prime time animated shows like the Flintstones. The popularity of this cartoon saga of a caveman family with modern blue collar sensibilities inspired a number of theme parks. One of those was Bedrock City in Williams, Ariz., not far from the Grand Canyon. Opened in 1972 with actors playing Fred Flintstone and Barney Rubble, Bedrock City offered attractions like foot-pedaled cars and a slide that looked like a brontosaurus tail. For lunch you could snag a Fishasaurus sandwich. Why is this park listed in the past when it is still open? One recent blogger visitor noted: “The park employs two or three people at best. Infrequent visitors drift in and out.” It is apparently in an advanced stage of decay although they continue to play Flintstones cartoons over the loudspeakers. A sister Bedrock City park in Custer, S.D., closed last year. This one has been up for sale for $2 million since 2015.

This northwest New Jersey water park has the reputation as the most dangerous theme park ever. It opened in 1978 at the site of the Great Gorge Ski Resort and closed in 1996. During that time six customers were reported to have died at the water park, which locals commonly refered to as “Traction Park” or “Class Action Park.” A Mashable story referred to it as “A lawless land that was ruled by drunk teenage employees, frequented by even drunker teenage guests, and filled with rides that seemed to defy even the most basic notions of physics and common sense.” 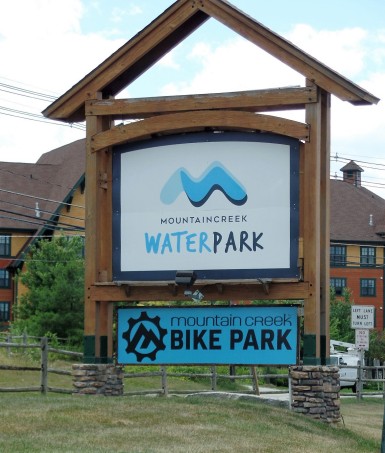 The park was reopened in 1998 with new owners, a new name, Mountain Creek, and without the unsafe rides. After the wave of publicity that followed the Mashable article and with a more adventurous new owner, the name was changed back to Action Park in 2014. But alas, the ownership changed again and with this owner not wishing to perpetuate the “lawless land” image, the name was changed back to Mountain Creek for this summer season. Mountain Creek is actually a lovely water park built on a ski slope in mostly wooded terrain. It is refreshingly pleasant on even the hottest summer days.  I visited recently and only whacked my head against a sidewall once.

Granted this sounds like a better theme for a Playground sandbox than for a theme park. Diggerland, West Berlin, N.J., is a construction themed park and is the U.S. outlet for a group that includes five parks in the U.K. Attractions include “dumper trucks,” a back hoe adventure and big diggers. You might think the Shake N’ Roll attraction is about music, but no, it a vehicle with rollers like the ones that smooth newly paved asphalt. You can get a taste of Diggerland online by looking at their web site live goat cam. Since our governor has stalled all road construction projects because he is bickering with the state Senate about how to fund them, Diggerland might offer the most heavy equipment action in the state.

Sandwiched amidst some of the biggest and best theme parks in the world in Orlando, Fla, is the Bible-themed Holy Land Experience. I took a look at the daily schedule and noticed that you can begin the day with “Holy Communion with Jesus” and catch “Baptisms with Jesus” right before park closing, weather permitting of course. There are also dramas throughout the day including “Four Women Who Loved Jesus” (do they dance and sing?) and a 60 minute “Passion of the Christ.” What else spells family fun like a bloody Jesus? This is a theme park? Well, not exactly, according to the owners who classify it as a museum and hence avoid paying property taxes. 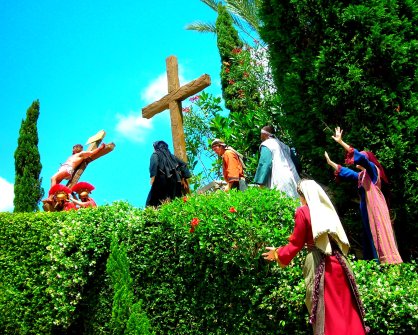 If crucifixion themed attractions aren’t your thing, how about this one? The Parque Ecoalberto in Cajon, Mexico, invites you to experience a simulated illegal border crossing. This 3-hour experience costs $20 and comes complete with sirens, whistles, chases and border guard impersonators yelling at you. The owners say this Caminata Nocturna attraction is in fact intended to discourage Mexicans from attempting to make the real trip. Though one wonders whether theme park goers are the right demographic for deterring illegal border crossers. There are some more conventional attractions like outdoor swimming pools and water slides. No word yet on whether they’ve been able to book Donald Trump to film a video in which he calls you a rapist as you leave the park.

Billed as Disneyland for foodies, this park is scheduled to open in Bologna in 2017. It promises to have some 25 restaurants as well as grocery stores and food courts. The intent is to cover all aspects of Italian food, “from farm to fork” according to a park spokesman. Other planned attractions include a chocolate fountain, oil mills and citrus greenhouses. And there will be lots of culinary education programs. But don’t book your trip yet as this was originally supposed to open in 2015 in conjunction with the Milan World Expo.

If you’re not a foodie, perhaps you’re more interested in sex. Mauro Morata, who is in charge of the project to build a sex-themed park in Piracicaba, Brazil, offers some high-minded ideals for this clearly not family-friendly attraction. The park is intended, he says, to teach people about sex and the history of sex and to encourage the use of condoms. Among the planned educational experiences will be a nudist pool, a snack bar selling aphrodisiac laced food items, rides shaped like genitals and a theater with vibrating seats. What is not supposed to happen at this park is actual sex. (Will they be patrolling the restrooms?) But, no worry, there will be motels nearby, operated by none other than ErotikaLand.

(All photos, except the ones from Mountain Creek, are from Wikipedia Commons public domain collection.)

13 Responses to Theme Parks: The Unusual, the Outrageous and the Outright Awful