Five days into the Sixth Annual Montclair Film Festival I’ve seen four of the 150 movies that are being screened. I’ve fallen off the pace I set last year when I watched 11 in 10 days. Sometimes life gets in the way. But what I’ve seen has been pretty impressive. I can recommend all of these.

For the third time in five years, the festival opened with an inspirational documentary, Step. The title refers to a kind of rhythmic stomping, chanting group dance which is most 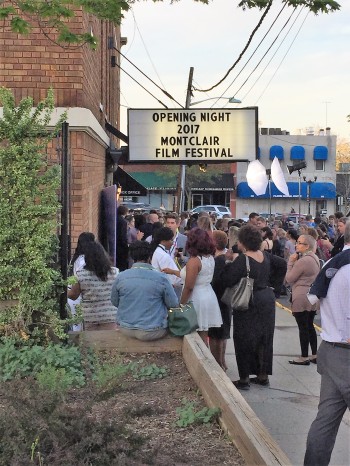 popular in predominately African-American schools. The movie follows members of the step team at a Baltimore charter school, the Baltimore Leadership School for Young Women. While the film follows the team through to a regional competition in Bowie, Md., the inspiration comes more from their experience at the school. The three team members which the documentary follows are girls with at least one caring parent, but with no resources to speak of. One of them, in telling us how her mother has always taken care of her, comments that they were homeless for a little while and she didn’t even know it. 2016, when the movie is filmed, is the first graduating class at the school. One hundred percent of these girls went on to college. One of the subjects of the film achieved her dream of a full scholarship to Johns Hopkins. Another got into some sort of college with a 1.0 GPA. Talk about a great guidance counselor. It also makes for a great movie. And, as was the case last year when Life, Animated opened the festival, some 1,500 people filled the Wellmont Theater to watch a documentary.

Ever heard of Dolores Huerta? Me neither. But Angela Davis and Gloria Steinem and Robert Kennedy knew all about her.  As does Barack Obama, who in awarding her the Presidential Medal of Freedom, admitted stealing the slogan “Yes, We Can” from Huerta. She was the co-founder with Cesar Chavez of the United Farm Workers and a primary organizer of the successful 10-year-long grape boycott that ended with growers signing the first contracts with UFW. She also fought against the use of DDT and police brutality. She was a feminist more in her actions than in her words. She married and divorced two husbands and had 11 kids, some from a later relationship with Cesar Chavez’ brother Richard. A better role model than a mother, many of her kids are interviewed in this film. They acknowledge that mom wasn’t around as much as they would have liked, but seem proud of her and some have continued her work. All 11 kids rallied to her bedside when she was hospitalized for a good period of time after being beaten by a coward with a badge and a billy club. Dolores herself is still going strong at 86. She was in Montclair for the first screening, unfortunately for me I went to the second screening. So why haven’t so many of us heard of her? The simple answer is because she is a woman, but there are other problems in our society that help answer that question. The Texas Board of Education banned her inclusion in the social studies curriculum. And in Arizona they went one step further when Governor Jan Brewer signed a bill into law banning the teaching of ethnic studies in Arizona schools. How ignorant is that? Brewer should be forced to watch this excellent documentary because she obviously is lacking some education.

Nothing about the movie Paradise has anything to do with any vision of paradise that I’m aware of. This sub-titled Russian film is set in Nazi Germany at the end of World War II. A Russian princess and a German nobleman who had a fling in Italy in the early 30’s find each other a decade later in a German prison camp. He’s a cold-as-ice concentration camp inspector for the Nazi ruling party and she has been imprisoned for hiding two Jewish children. The movie is in black and white. Because grim doesn’t come in color. How many ways are there to despair? This film covers most of them. There is one major act of humanity that at least offers some hope in not quite paradise. The movie title Paradise comes from a Nazi vision of such. Having said all that, this is a brilliantly scripted and engrossing movie. It’s just not always that easy to watch. The movie is part of the competition for audience choice awards. I gave it a four out of five.

What’s the first thing you think of when you think of New Jersey? Bravery, right? It’s a part of our heritage which is explored in this fictional movie about how the rural Central Jersey town of Lullaby responded to Orson Welles’ “War of the Worlds” radio broadcast in 1938. One of Lullaby’s brave residents jumped in his truck and crashed it into a tree. Another took off in the family car, without the family. And the town minister saw the light after whacking himself n the head with a collection plate. On this night when the good folks of Lullaby thought it might in fact be their last, a marriage and an engagement fell by the wayside. And a new couple or two discovered each other in the darkness. Brave New Jersey mixes fact and fiction, just like Orson Welles himself. This is the funniest movie I’ve seen about Central Jersey since “Clerks.” You don’t have to be from New Jersey to enjoy this one. Fun for everyone.

Earlier I noted how impressed I was that 1,500 people showed up for a documentary on opening night. The third screening of Brave New Jersey was on a Tuesday at 11:30 a.m. And the largest theater at the Bellevue Cinema was full.

6 Responses to Montclair Film Festival 6 — From Baltimore to Paradise