Trump’s Little Whorehouse on the Prairie

At the very end of the 19th century, some 100,000 or so prospectors made their way north toward the Canadian Yukon in search of their fortune. Most of the participants in the Klondike Gold Rush came away empty handed. It has been estimated that 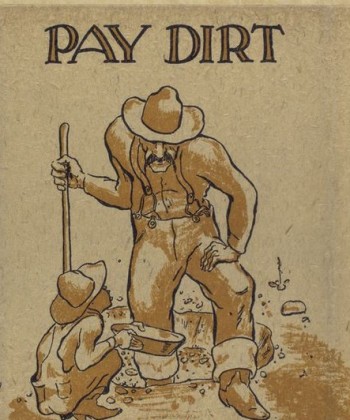 only about 4% found gold. But some others learned they could make a fortune off of these fortune seekers. Because when some of the guys did score some gold dust, they might go over to the nearest pop up town and look for some loving. And that’s when they’d head on over to Fred Trump’s place.

16-year-old Friedrich Trump, grandfather of Donald Trump, arrived in the U.S. from Germany in 1885. If you are just counting cash, Grandpa Trump was an immigrant success story. But, like some of his descendants, he had an erratic relationship with the truth and with the law. Trump lied about his age to become an American citizen. He built one of his first establishments in Washington state on land he didn’t own. On his way up to the Yukon he set up a canteen on a dangerous mountain pass known as Dead Horse Gulch. It got its name from the number of dead animals that lay strewn across the pass as a result of owners who whipped them to exhaustion. What did Trump serve at his canteen? Horse meat. Today we might call it road kill. 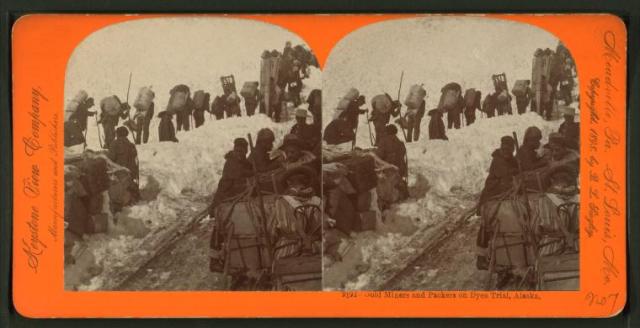 Trump started out in New York working in a barber shop. After a few years he headed west seeking his fortune. His first venture was to buy a restaurant called the Poodle Dog, which he later renamed the Dairy Restaurant, in the middle of Seattle’s red light district. David Cay Johnson, author of The Making of Donald Trump, describes another of Grandpa Trump’s early ventures: “On a piece of land he didn’t own, right across from the train station, Friedrich built a hotel of sorts—one intended mostly for, shall we say, active short stays, not overnight visits.”

But where Trump made his real money was in gold rush territory. He opened a restaurant called the Arctic with a partner in the town of Bennett, British Columbia. Bennett was a way station for fortune seekers headed north. On the menu was salmon, duck, goose and swan. High end stuff for gold rush country. And it was open 24 hours. But, alas, it was no place for family dining. An ad in the Bennett Sun in 1899 mentioned the “private boxes for ladies and parties.” These boxes came equipped with a bed and a scale. We know what the bed was for, but the scale? I found this answer in the Canadian news magazine Macleans:  “’Ladies of the night’ often hiked the trail in skirts, and they stayed at the Arctic Hotel to entertain gold diggers, using a scale to weigh gold powder for payment.”

A new railroad line eventually bypassed Bennett. Trump disassembled his restaurant, loaded the lumber onto a barge, and reopened in Whitehorse, the terminus of the rail line.

Pockets full, Grandpa Trump hightailed it out of gold rush country in 1901 amidst rumors that the Canadian Mounties were about to begin enforcing prostitution and alcohol laws. He headed back to Germany where he married Trump’s grandmother. But he didn’t stay long. The Germans, determining that he had left to avoid military service, tossed him out. So he picked up his 80,000 marks (estimated to be the equivalent of a half-million Euros today) and headed back to New York where he made the first Trump family real estate investments.

Was the Trump family fortune originally earned on the backs (or should we say some other body parts) of the sex workers of the Yukon? No one really knows for sure whether the profits came from the roasted duck or the ‘sporting ladies.’

Much of what we know about Trump’s grandfather comes from the research of Gwenda Blair, author of the book “The Trumps: Three Generations That Built an Empire.” That book was written in 2000, long before we thought Trump was a serious Presidential candidate.

Trump himself has denied the whole story. He claims his grandfather was of Swedish descent. But it is believed the Swedish heritage claim was started by Trump’s father who, during the years between the world wars, had a number of Jewish customers for his real estate business and wanted to hide the German heritage of his parents.

When he finds out there is money to be made, Trump might change his tune. In true Trumpian entrepreneurial fashion, some Canadians are trying to restore the Arctic and make it a tourist attraction. Imagine the lure, for the American tourist in particular, of getting to bring the family to the site of our 45th President’s grandfather’s whorehouse.

14 Responses to Trump’s Little Whorehouse on the Prairie