Guns in America: The Americanization of the Duel

When the first European explorers found their way to these shores they brought the first firearms to a gun-free society. When the first colonists settled in, they imported another piece of European culture, a rather definitive dispute resolution practice known as dueling.

The duel goes back to medieval times. It was a sort of primitive alternative to courts. In the Middle Ages they believed God would decide who was right and that his opinion would be represented by the winner of the man-to-man combat. Originally duels were fought with swords and in the earliest versions if the loser came out alive he’d be executed anyway.

By the 17th and 18th century, the nature of dueling evolved and became a aristocratic exercise based on honor. There were specific rules about who challenges who, who picks the weapons, how the process would unfold and when it had reached a satisfactory conclusion. It was not necessarily fatal. Some historians claim a fatality rate of only about 20%. And as pistols began to take the place of swords in the 1800’s their cumbersomeness and lack of accuracy made them far less lethal than you would expect.

Did dueling catch on in America? The first colonists came to these shores in 1619. By 1620, their Plymouth colony had seen its first duel. Like so many of the customs we imported from Europe, dueling in the new world would eventually take on a distinctly American style.

That first duel in the Plymouth colony was between Edward Lester and Edward Doty. What was totally unique about their duel is that they were both servants. They chose to settle their dispute with a sword fight. Each received a non-deadly wound and they called it a day. But the Plymouth colony didn’t let it go at that. They were sentenced to be tied together hand and foot for 24 hours without food or water. Partly at the behest of their master, they were released after an hour.

One should no overstate the egalitarianism of American dueling. There were no farmworkers or laborers challenging their bosses. It was still the domain of the moneyed classes but rather than being all about landed and hereditary aristocracy, the participants in American duels were often politicians, lawyers and even journalists.

In Europe most duels were either about a woman or some personal affront that the haughty offended gentleman considered a challenge to his honor. In America the challenge to a duel often came as a result of a perceived insult hurled as part of a public policy debate. This is of course the country where one of our founding fathers was gunned down in a duel with a sitting vice president. Senators were known to turn to the pistol and hurl a challenge across the aisle. Duels were held over the issue of slavery. Newspaper editors saw this a way to settle disputes with their rivals. And since the politicians and lawyers who were active duelists were public personas, their challenges and responses were often made very publicly, even published in local newspapers like some sort of legal ad.

3. Making our own rules.

The go to guide for dueling was written by a group of Irishmen in 1777. Known as Code Duello, it was also called the 26 commandments. It starts out thus: “Rule 1. The first offense requires the first apology, though the retort may have been more offensive than the insult. Example: A tells B he is impertinent, etc. B retorts that he lies; yet A must make the first apology because he gave the first offense, and then (after one fire) B may explain away the retort by a subsequent apology.” Huh??

We as Americans like to make our own rules. So we did exactly that. In 1838 “The Code of Honor” was published by John Lyde Wilson, the former governor of South Carolina. Wilson’s guide, published at a  time when dueling was starting to decline, offered extensive advice as well as rules for both the combatants and their seconds. He even touches on the appropriate demeanor: “The principals are to be respectful in meeting, and neither by look or expression irritate each other. They are to be wholly passive, being entirely under the guidance of their seconds.“  Wholly passive that is, until you plug your opponent with a bullet. Just no trash talk!

Another American addition to the dueling process was “posting.” This was primarily done in the Southern states and was intended to humiliate the challenged gentleman who passed up on the opportunity to duel. It involved a written a statement with the person’s name, identifying him as a coward, and posting that statement for public perusal or publishing it in a newspaper. The fear of posting no doubt led some to head to the dueling grounds who were otherwise not so anxious to do so. 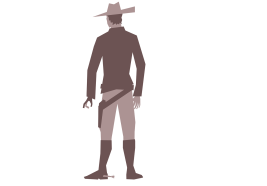 Perhaps the most uniquely American iteration of the duel was the quick draw duel. A product of the Western frontier this is just a straight out gunfight. No rules, no seconds, no negotiations, nor processes. Just stand face to face and whoever draws their six-shooter the fastest and gets in the first accurate shot lives to see another day.

Dueling was essentially illegal throughout most of the world and had been for centuries. As early as the 13th century the Roman Catholic Church had taken a position in opposition to dueling. In France, one of the most active dueling countries in Europe, King Louis XIII outlawed the practice in 1626 and that’s been the law of the land ever since. Yet between 1685 and 1716 there were 10,000 duels in France.

In the U.S., Benjamin Franklin was an opponent of dueling. He wrote:  “How can such miserable Sinners as we are entertain so much Pride, as to conceit that every Offence against our imagined Honour merits Death?” George Washington was not a fan either, though for more practical reasons, as he could not afford to lose his soldiers to duels.

By the beginning of the 19th century and after the national shock of the Hamilton-Burr duel, the practice started to decline in the north. Not so the south where dueling continued to be a common occurrence until mid-century. In 1839, after another congressman was killed in a duel, the practice was outlawed in Washington D.C. Not in Maryland though and Bladensburg Dueling Grounds in Comar Manor, Md., hosted many duels between Washington based pols.

Some 18 states had outlawed the practice by the middle of the 19th century. But it was likely less the law that brought an end to dueling as much as it was the Civil War, the widespread bloodshed experienced throughout the country and the breakdown of southern plantation society.

In next week’s post I’ll take a look at some of the prominent 19th century Americans who shot each other up at the dueling grounds.

9 Responses to Guns in America: The Americanization of the Duel