A Growing Up in the 50’s Book Review: Ike and Dick

Prior to reading Jeffrey Frank’s book my opinion of these two men was that Eisenhower was probably a decent man and fairly good president. Nixon, on the other hand, was Tricky Dick. I was half right. 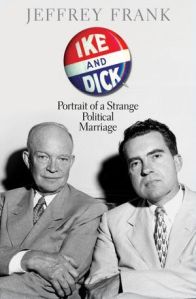 If your image of Eisenhower is of a conquering hero, a general returning from a victorious war as a national hero and assuming the role of commander in chief, you’ll be surprised at Frank’s portrayal. For one thing, Ike couldn’t make decisions. This was so frustrating to those around him that his normally obedient and submissive vice president once crudely encouraged him to “shit or get off the pot.” He also tended to avoid speaking his mind directly to the parties concerned, especially if bad news was involved. One gets the impression that what he said publicly and what he really believed were not necessarily in line. The author notes that “now and then Eisenhower would offer a bit of military wisdom disguised as double talk.”

But despite his military background, Ike was, to his credit, a man of peace. He pulled us out of the Korean War shortly after taking office, an act which Frank notes could only have been accomplished by a revered war hero without getting backlash from his own party about getting out without victory. He also wanted no part of what he saw was going on in Vietnam. “No one could be more bitterly opposed to ever getting the United States involved in a hot war in that region than I am,” Ike said.

Nixon, on the other hand, was anxious to get involved in Vietnam as early as 1954, an eerie sign of what was to come later in his career.

Ike seemed to downplay issues. When the Soviets launched Sputnik, prompting a round of consternation amongst politicians of the time, Ike is said to have joked at a National Security Meeting, “Any of you fellows want to go to the moon? I don’t.” While he was right to not attach too much importance to Sputnik, in his case you get the feeling that he consistently minimized the importance of issues because of some reticence to deal with them.

What Eisenhower really liked to do was to head over to the country club, play a round of golf, and then spend the day hob-nobbing with a select group of affluent and elitist cronies (that never included Nixon).

As for Nixon, it is easy to have some fun with the man. As early as 1949 he was described in an article in The Nation magazine as a “dapper little man with an astonishing capacity for petty malice.” In the late 50’s when as vice president he was meeting with Nikita Khrushchev, he is reported to have told the Russian you may have beat us into space but we have more color TV’s.

While seeking the Republican nomination in 1968 he said in a National Review interview “They still call me Tricky Dick. It’s a brutal thing to fight.” This was only a few years after he was quoted as saying “anybody who thinks I could be a candidate for anything in any year is just off his rocker.” And then there’s the story about when he finally became president he would send memos to his wife Pat with the heading TO: Mrs. RN; FROM: The President.

I tried to find something good to say about Nixon and I thought I found something. During the 50’s and early 60’s he seemed genuinely committed to civil rights. I thought he was, based on the author’s description, as color blind as white Republican politicians got. He seemed to truly admire the era’s civil rights leaders and understood the need for the government to take action to assure equality for all.

But alas by 1968 he is running for president and sees the white Southern vote as a key constituency. He then becomes, in the words of one-time ally Jackie Robinson, a “double-talker, a two-time loser, an adjustable man with a convertible conscience.” And that, my friends, is why we call him Tricky Dick.

Eisenhower was, by the way, no champion of civil rights. In the early 60’s, after his term in office, he is shockingly quoted as saying of segregationists, “They are not bad people. All they are concerned about is to see that their sweet little girls are not required to sit in school alongside some big, overgrown Negroes.”

The sub-title of Frank’s book is “Portrait of a Strange Political Marriage” and the theme of his narrative is that they are an odd couple. He points out as an example of how different they were the 1954 mid-term election campaign. Nixon traveled 25,000 miles, visiting 100 cities in 30 states. Eisenhower spent the first month of the campaign in Denver where, according to Nixon, “after a few hours of work in the morning, he would golf in the afternoon.”

Eisenhower in general looked down on men who were full-time politicians. He probably didn’t have much respect for Nixon. From reading Frank’s account I suspect he would have preferred a different running mate both in 1952 and 1956 and would rather have seen a different GOP candidate to succeed him in 1960. Typically, however, he never directly expressed that opinion.

It is hard to know what Nixon’s personal feelings were. He said and did what best advanced his career. Thus in all public pronouncements he venerated Ike. He was an insecure and paranoid man and constantly sought a nod of approval from Ike which more often than not wasn’t directly forthcoming. The author notes that Eisenhower, while president, was fond of drawing up lists of successors and that “no one knew better that Nixon that he was never first in any of those lists.”

There is one amazing quote that stands out from the 1960 presidential election campaign when Eisenhower was nominally campaigning on behalf of Nixon’s unsuccessful candidacy. One of the issues in that campaign is whether Nixon’s term as vice president gave him the experience required for the step-up job. During a TV interview Eisenhower is asked “I just wondered if you could give us an example of a major idea of his (Nixon’s) that you had adopted in that role.“ Ike answered “If you give me a week, I might think of one.”

Like Loading...
This entry was posted in Book reviews, Growing Up in the 50s, History and tagged 50's, books, civil rights, Eisenhower, history, Nixon, politics. Bookmark the permalink.