Americans Discover Vacation: Under the Influence of PR

The emergence of public relations in the United States chronologically coincided with the growth of vacationing in America. As more and more Americans started to go on vacation there was a corresponding increase in the number of resort owners, local businessmen, transportation companies and government officials who were ready and willing with suggestions about where they should go.

So you find many of the practices which we currently associate with modern day PR, media relations, press trips, content marketing and sponsored events, getting their start in the late 19th and early 20th centuries. There’s even a few instances of journalists slipping over to “the dark side” in all probably in search of a steadier income. 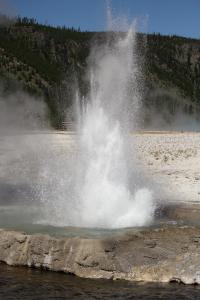 In an earlier post I brought up the case of a Dr. Thomas Goode, proprietor of the Virginia Hot Springs Resort. Dr. Goode published promotional pamphlets that included testimonials from folks who suggested that spring water was a cure for deafness and paralysis. This was in 1848. Here’s a guy who was clearly a doctor of spin.

Newspapers were an important vehicle for getting resort and travel information to the public. So it’s not surprising to find that resorts were ready to get into the business we would come to know as media relations. In Working at Play, author Cindy S. Aron notes that some resort proprietors started to offer up vacant rooms to newspaper correspondents. “Happy journalists then allegedly wrote glowing reports.”

It was at about the turn of the century that public relations started to become a paid profession. And it was right about that time when corporate PR departments started to create brand-name destinations for traveling Americans. Nowhere was this more apparent than in the West and specifically with the emergence of national parks as popular Americans vacation spots.

The first of the national parks, Yellowstone, was created in 1872 when Ulysses S. Grant signed the Yellowstone Park Act. According to Marguerite S. Shaffer, author of See America First, the idea to make Yellowstone a national park originated with Jay Cooke, the banker who financed the Northern Pacific Railroad. Promoting Yellowstone meant more passengers for the train line that went in that direction. For that same reason the Atchison, Topeka and Santa Fe Railroad promoted the Grand Canyon and the Great Northern Railway promoted Glacier National Park.

The Great Northern, according to Shaffer, “rewarded newspapers and magazines that published articles on the park by purchasing advertising.” And if you’re going to start a media relations campaign, who better to run it than a former journalist. Great Northern hired Milwaukee Journal reporter Hobie Smith as a one-man PR department.  Shaffer describes how Great Northern gave journalists free rides to the park. In 1911 they organized their first press tour of Glacier National and, lo and behold, profited from widespread newspaper publicity.

Writers and artists, including painters, photographers and later videographers, were also courted by the resorts, the railroads and their PR reps. They produced what today we would call content marketing or native advertising. As an example, Shaffer notes that Great Northern courted the short story writer Mary Roberts Rinehart and sent her off on a group expedition around Glacier National. She returned the favor with a series of articles for Collier’s magazine in 1916.

In his book Sacred Places, John F. Sears, writes: “The raw material of nature was rapidly transformed into a cultural commodity by reproducing and marketing verbal descriptions and pictorial representations of these places.” 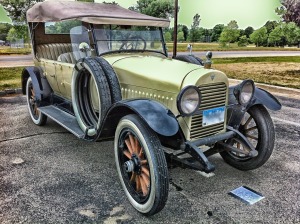 As the automobile began to replace the railcar as the preferred vehicle of vacationers, the onus for promoting vacation destinations began to shift to car companies and, in the case of the national parks, the government agencies responsible for those parks.

When Alice Huyler Ramsey made the first coast to coast auto trip by a woman (see Women on the Loose) she did it in a Maxwell touring car. That car was supplied by the Maxwell-Briscoe Company. That was an example of the PR efforts that the car companies were undertaking to present their product as the preferred means of touring in America. This type of promotion would eventually lead to the 50’s advertising jingle “See the U.S.A in a Chevrolet.”

In 1911 the Department of the Interior created a photo exhibit of the national parks that toured libraries. They also brought in the Kinemacolor Moving Picture Company to create videos (or in early 20th century vernacular moving pictures) of Yellowstone, Yosemite, Glacier National and others. While the government had only a modest budget for this, according to Shaffer, funding came from business interests associated with the parks.

Robert Sterling Yard, whose credentials included stints at the New York Sun and New York Herald, was hired on by the department to essentially write press releases. Shaffer says “he established a national parks news service and began writing articles for magazines, including press bulletins, collecting and distributing photographs and statistics…”

This type of PR campaign was still being promoted by the U.S. government well into the 20th century. Shaffer describes the Lyndon Johnson administration’s “See the USA” program. In 1967 that included a Discover America Vacation Planning Week replete with buttons, posters, a sweepstakes and a theme song.

PR, marketing and promotion were a key part of the success of many different properties and destinations. And there is probably no better example than the establishment of the national parks as a tourism brand, a distinctly American tourism brand, and the vast numbers of Americans who were drawn to Yellowstone, Yosemite, the Grand Canyon and others as their vacation destination.

17 Responses to Americans Discover Vacation: Under the Influence of PR