Dead Wake, The Last Crossing of the Lusitania, by Erik Larson 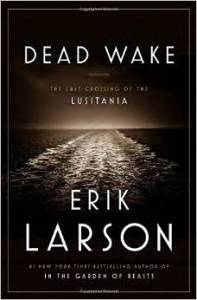 I have read two of Erik Larson’s previous works. I was totally engrossed in Devil in the White City and then picked up Thunderstruck. I found it to be almost the same story albeit about a different historical event and different killer. It was almost as though Larson was plugging the results of his research into a template for combining history and true crime stories. So I laid off his books for a bit. That is until a review copy of Dead Wake materialized on my kitchen counter. I’m glad it did.

What Larson does as well as anyone is to craft rich historical characters that have as much depth as the creations of good fiction writers. That isn’t just for well known figures like Woodrow Wilson for whom there are extensive writings both by and about, but for characters like second class passengers on the Lusitania and the captains of German U-boats. Every time I’ve read a Larson book I have at least once turned it over to take a look at the back cover to verify that it was indeed nonfiction.

Larson is a meticulous researcher who embellishes his stories with a minute level of detail. We learn, for example, that one of the passengers on the Lusitania was the New England bookseller Charles Lauriat. We know that he was carrying with him a rare original copy of Dickens’ Christmas Carol as well as some drawings by William Thackeray that he was bringing to London to show Thackeray’s sister. We even know that on the day of the attack he got up at 8 a.m.

What I don’t always like about Larson’s writing is that he has a bit of a flair for the melodramatic. Consider this sentence, referring to the earlier disappearance of an American citizen aboard a British ship that was attacked by a German submarine: “It was one more beat in a cadence that seemed to be growing faster and louder.”

Dead Wake is a reminder of what a brutal affair World War I was. This is a war in which massive armies set up in trenches facing each other and fired away, not gaining so much as an inch in territorial advantage but killing and maiming tens of thousands of young men who were conscripted into service. It was a war in which civilians were consciously targeted and slaughtered as well. A war of terrorism, a harbinger of what we would see in the next 100 years. The sinking of the Lusitania was an act of terrorism. 1,195 people died. None were military personnel.

Nor were the combatants in the so-called Great War concerned about putting civilians in harm’s way. Although the Lusitania was a passenger ship it was carrying 1,250 cases of shrapnel-laden artillery shells produced by Bethlehem Steel and en route to the British troops on the continental front. Not that the captain of the German submarine who fired the torpedo that gutted the Lusitania was aware of this. In fact, if Larson’s account is correct he didn’t even know it was the Lusitania he was bringing down until after the fact.

If you watched the Oscar-nominated movie The Imitation Game, you saw the story of the British mathematicians who intercepted and decoded German messages in World War II. Part of that story was the cautiousness with communicating and using the information that they obtained for fear of Germany realizing they had cracked the Enigma code. At one point they withheld what they knew even though it meant a British ship was going to be destroyed. In World War I that group was called Room 40 and they were equally secretive. Larson suggests, in fact, that Room 40 may have had information that could have saved the Lusitania that was never communicated to the ship’s captain. He also raises the question of whether some in the British Admiralty refrained from any effort to ensure the safety of this ship in hopes that an attack on the passenger liner that had departed from New York would bring the U.S. into the war.

We all know what the outcome of this story is going to be. Nevertheless, Larson creates suspense by alternating chapters about life on the Lusitania and life on the U-20, the German sub which fired the fateful torpedo. He skillfully builds up that suspense until their worlds collide.

This is simply an enormously interesting book. It is the saga of the sinking of the Lusitania, but it is also the story of the lives of the people on the ship and on the submarine.

21 Responses to Worlds Collide, a Review of Dead Wake