Will Cars Fly? Or Will They Just Get Smarter?

When people talk about the cars of the future, three things usually find their way into the conversation. Ranging from the nearly there to the seemingly impossible, they are:

Before cars fly, they will be updatable, much the way your phone is now. Car manufacturers will be able to add new features by updating software and may be able to correct problems that would now lead to a recall and a much-dreaded visit to the dealer.

Tesla has already used remote wireless software updates to add emergency braking to its vehicles and promises in the future to be able to add features like automated steering and a valet function that enables you to get your car from a parking garage by using your phone. 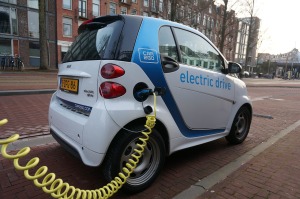 Connected cars could talk to other connected cars, a way to perhaps ensure a safe distance between vehicles. And, amidst an internet of things, the car can communicate with sensors on traffic lights, street signs or utility poles. You might be able to get some advice as to the nearest parking spot or maybe a warning that at your current speed you won’t be able to negotiate the upcoming bend in the road.

Many of these features represent the baby steps in the march toward driverless, or autonomous cars. And the motivation is safety. It has been estimated that driverless cars could prevent as many as 9 out of 10 accidents.

We have seen a growing increase in automotive features that involve automating tasks that used to be the responsibility of the driver. There are cars on the market today with automated braking systems, with devices that detect pedestrians or bikers, that will tell you if someone’s in your blind spot or if you are drifting out of your lane. There is even software that can detect that you’re getting drowsy.

As more and more of these features are added, we get closer to day when the driver is no more useful than a crash test dummy. For established car companies this seems like an evolutionary process. But they are no doubt looking over their shoulder at Google, a company without the catalog of dinosaurs to protect.

So when will we see driverless cars? Google is already testing them on public roads in California. In Michigan a fake town, Moby, has been built for the sole purpose of testing autonomous vehicles. Mercedes-Benz, Nissan and Audi are all testing driverless cars. Google says they’ll be ready by 2018. Nissan will have them for sale by 2020. Uber is predicting its entire fleet will be autonomous by 2030. And the Institute of Electrical and Electronics Engineers (IEEE) predicts that driverless cars will constitute 75% of the vehicles on the road in 2040. Tesla CEO Elon Musk has even suggested that the day may come when drivers are illegal on some roads.

There are a number of problems still to be overcome. If you can be wirelessly updated, you can be hacked. What happens if the computer system driving your car crashes? But the biggest issue might be sharing the road with human drivers. Your law-abiding robotic vehicle may come to a stop when a traffic light turns yellow, but the guy behind you might floor it to make the light. Can a courteous safety-conscious auto-driver ever make its way through a busy intersection with a four-way stop sign? Google claims that its driverless cars have been involved in 16 accidents during the course of their tests and that every one of those fender-benders was caused by a human driver.

Not everyone is convinced that driverless is the way to go. Toyota, for one, is focusing its efforts on assisting and improving drivers rather than replacing them. Last week Toyota announced a $50 million research project, working with MIT and Stanford, to explore the use of artificial intelligence to upgrade drivers. (Toyota to Finance $50 Million ‘Intelligent’ Car Project). Gil Pratt, who is heading the initiative commented,  “A worry we have is that the autonomy not take away the fun in driving. If the autonomy can avoid a wreck, it can also make it more fun to drive.”

None of these initiatives, however, are going to help you with the massive pothole, the construction detour or the crumbling bridge. Not to mention the mind-numbing traffic that is predicted to get a lot worse. One of my readers commented in a previous post that her 6-mile commute to her office already takes 45 minutes. For that, we need cars that fly.

I found a company in Massachusetts that purports to the able to do just that. Per Terrafugia’s Web site: “Our first product, the Transition, is a two-place, fixed wing, street legal airplane which has been internationally heralded as the ‘first practical flying car.’  It is designed to fit in a single car garage, be safely driven on the highway, and be flown in and out of general aviation airports. “

There is also a Slovakian company named AeroMobil, which at this year’s South By Southwest Interactive claimed they’ll have a flying car in the market by 2017 and that the price will fall somewhere between a Tesla and a small private plane,. So it won’t be cheap. We’re probably quite a ways off from worrying about traffic jams moving off the ground. But it will be nice for the couple of folks here and there who can afford them.

Like Loading...
This entry was posted in Technology and tagged automotive, cars, driverless cars, future, technology, transportation. Bookmark the permalink.

21 Responses to Will Cars Fly? Or Will They Just Get Smarter?