Before There Were Amusement Parks

Amusement parks as we know them did not come into being until the latter part of the 19th century. But there were a host of predecessors, some dating back to the middle ages, ranging from beer gardens to world expositions. Each played a role in influencing what we would come to know as an amusement park. 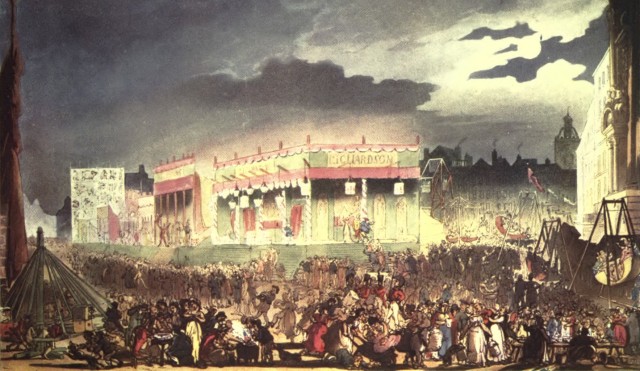 Fairs were one of the earliest forms of public recreation and entertainment and one of the most famous was London’s Bartholomew Fair. Chartered by Henry I in 1143 it had an amazing run that lasted for more than seven centuries. Over the years there were musicians, prize fighters and wrestlers, tight-rope walkers and acrobats and of course an ample supply of beer, tobacco and food.  Roast pork was a staple.

A visitor in 1815 reported seeing a “learned pig” which, despite being blindfolded, could tell the time. And a report from the 1825 fair describes an elephant that could uncork bottles. The fair also developed an underbelly of pickpockets and prostitutes active on the Bartholomew grounds. The latter were gently named “soiled doves.” And if you couldn’t find a soiled dove to your liking in the tents on the fairgrounds, there was apparently an ample supply on the nearby and aptly named Cock St.

The Bartholomew Fair’s run ended in 1855, closed down by the city because it was perceived as encouraging debauchery.

It is also in England where another of the predecessors of the amusement park took shape. Pleasure gardens flourished there in the 17th and 18th centuries. True to their name, they were most often gardens that you could walk through and find various entertainments such as music and exhibitions and of course food.

One of the most famous of the pleasure gardens was Vauxhall Gardens. It opened in Kensington on 12 acres in 1661. By the end of the 18th century, Vauxhall Gardens began charging admission, something that would be a standard feature of the amusement parks that succeeded it. 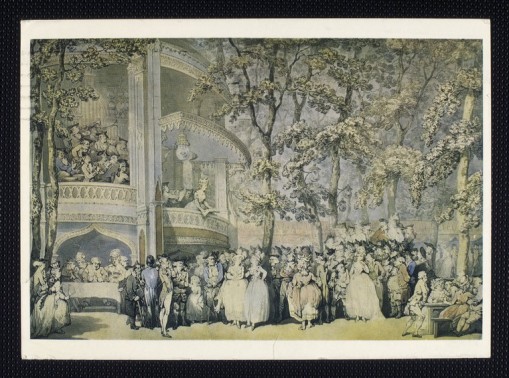 One of Vauxhall Gardens’ more illustrious visitors was none other than Charles Dickens. Writing in Sketches by Boz,  here’s how Dickens described the scene:

We paid our shilling at the gate, and then we saw for the first time, that the entrance, if there had been any magic about it at all, was now decidedly disenchanted, being, in fact, nothing more nor less than a combination of very roughly-painted boards and sawdust. We bent our steps to the firework-ground; there, at least, we should not be disappointed. We reached it, and stood rooted to the spot with mortification and astonishment. That the Moorish tower—that wooden shed with a door in the centre, and daubs of crimson and yellow all round, like a gigantic watch-case! That the place where night after night we had beheld the undaunted Mr. Blackmore make his terrific ascent, surrounded by flames of fire, and peals of artillery, and where the white garments of Madame Somebody (we forget even her name now), who nobly devoted her life to the manufacture of fireworks, had so often been seen fluttering in the wind, as she called up a red, blue, or party-coloured light to illumine her temple.

In America, the wave of German immigration in the last half of the 19th century introduced us to a Germanic variation of the pleasure garden, the beer garden. It is perhaps here that many Americans were introduced to German style lagers, and maybe some schnitzel and wurst as well. Some of these beer gardens became quite elaborate with entertainments like shooting ranges and bowling alleys and perhaps a classical music performance. Others were little more than a row of tables where you could keep your focus on the brew. 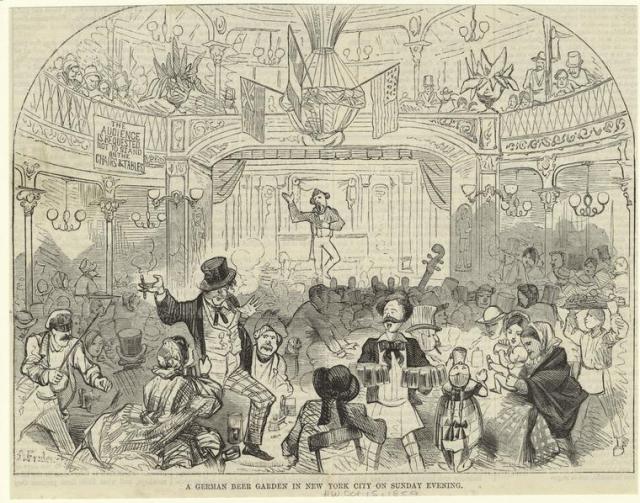 Perhaps the events that most directly shaped the earliest amusement parks were world’s fairs. The first world’s fair was held in London in 1851 with its famed Crystal Palace, a 990,000 cast iron and plate glass structure that housed more than 14,000 exhibitors. But when it comes to influencing the latter day amusement park, no event had a greater impact than the World’s Columbian Exposition in Chicago in 1893.

One of the Chicago fair’s contributions that became a standard for amusement parks to this day was the midway. The midway was conceived as a rather high minded cultural educational endeavor. It included such attractions as an African village and a “Streets of Cairo” exhibit. But it also brought some entertainments that were rather edgy back in 1893, like belly-dancers. And one suspects that there was a fine line between cultural enlightenment and voyeurism on the world’s first midway. 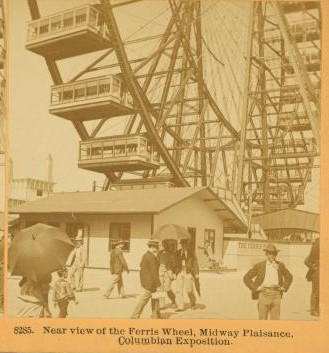 One of the grandest of attactions on Chicago’s midway was the first ferris wheel, something that no amusement park ever since could be without. George Ferris’ invention was conceived by fair organizers as Chicago’s answer to the Eiffel Tower, unveiled during the 1889 Paris world’s fair. Ferris’ wheel was 264 feet tall, its cars could hold 60 passengers and it took 20 minutes to make one complete revolution.

In next week’s post I’ll take a look at the first amusement parks and some of the oldest parks that are still in operation today.

23 Responses to Before There Were Amusement Parks