American Pioneers of Amusement, Part 2: The Fearless Frogman, a Collector of Human Oddities and a Roller Coaster Engineer

This is a guy who at 15 lied about his age so he could join the Union Navy and fight in the Civil War. This is a guy who swam across the English Channel in an inflatable rubber suit, feet first. This is a guy who took a job with the Peruvian government that involved swimming offshore and trying to plant torpedoes on the Chilean ships that were embargoing Peru.

Paul Boyton was probably born in Ireland in 1848. But it might have been Pittsburgh where he grew up. The “Captain” might have come from his adventure in Peru or it might have been bestowed on him for his involvement with the United States Life-Saving Service, a predecessor to the Coast Guard, in Atlantic City.

Boyton in his rubber suit

Known as the “Fearless Frogman,” Boyton was once credited with making 71 life-saving rescues during a two-year stint as a lifeguard in Atlantic City. But it was the English Channel crossing that made him an international celebrity in the late 19th century. He toured Europe for five years with his rubber suit, putting on exhibitions that included going down waterfalls and through rapids. He did the same in the U.S., going down the Mississippi in 1876 from Alton, Ill., to St. Louis.

The rubber suit had inflatable tubes. Boyton likely was hoping to sell it as a life-saving device but had no luck with that. It appears that Boyton spent most of what he received and thus was almost always in need of a way to generate cash.

He managed an aquatic show as part of the Barnum circus for a while then settled in Chicago in 1885. It is there that he began to make his mark in the amusement business.  In 1894 he opened Paul Boyton’s Water Chutes. This park is the first amusement park in America to rely solely on mechanical attractions, as opposed to places like Coney Island and Atlantic City where there is beach and ocean.

Boyton also brought the Chutes ride to England (Earlscourt World’s Water Show) and to Belgium (1894 Antwerp World’s Fair). But if you were into building and promoting amusements in the 19th century, Coney Island was the place to be. And Boyton opened Sea Lion Park in Coney Island in 1895. In addition to Shoot the Chutes, Boyton still did swimming exhibitions in his rubber suit and there were as many as 40 sea lions who juggled and competed in races.

Boyton sold Sea Lion Park in 1902 after a difficult, rainy season. It was incorporated by the new owners into Luna Park. Boyton’s Chutes ride kept going at Luna Park until 1944. Boyton himself settled in Brooklyn and lived there until his death in 1924.

While George Tillyou and Paul Boyton was instrumental in making Coney Island the birthplace of American amusement parks, Gumpertz contribution was to add the sideshow. Gumpertz took the amusement park and added a little circus and a bit of carnival.

Gumpertz was born in Washington in 1868 and moved to St. Louis at an early age. By the time he was nine, he had run away with a circus. Given his size he became the “top mounter” in the pyramid of acrobats. A variety of entertainment related gigs followed. At one time he was a child actor at the Tivoli Opera House in San Francisco, but lost that position when his voiced changed. He left a ranching engagement to run away with Buffalo Bill’s Wild West Show. His resume also included producing some Shakespearean plays and he was manager for a young Harry Houdini.

Gumpertz eventually settled into Coney Island and shifted his focus to the display of human oddities. One of his best known creations was Lilliputia, part of Dreamland, another Coney Island amusement park. Lilliputia was set up as a miniature city populated by some 300 small people, many of whom Gumpertz had recruited from various expositions. They had their own parliament and their own fire department, the latter of which staged a false alarm every hour for park guests.

Dreamland, like its other wood-structured neighbors burned down in 1911. Gumpertz kept going, setting up the Dreamland Circus Sideshow, operating out of a tent on Surf Avenue. One of his lead attractions was the pinhead “Zip What Is It.” And there was two-foot tall Baron Paucci and Lionel the dog-faced boy. Gumpertz’ freaks were real. He traveled to Asia, Africa and Europe and it is estimated that he imported 3,800 unusual people. For his Wild Man of Borneo exhibit he leased 19 “wild men” from a tribal chieftain in Borneo. He also paid the government of French Equatorial Africa $3,000 a week to bring over 12 “platter-lipped” women. The women were part of a tribe where it was custom to stretch their lips on wooden platters, sometimes as much as 10 inches wide. They were accompanied by their husbands, although not all the husbands made the return trip as a couple ran off with normal lipped African-American women.

Gumpertz kep his show going through the 1920’s. In 1929, at age 67, he once again ran away with a circus, leaving Coney Island to join Ringling Brothers.

Not just an engineer, Lina Beecher has gone down in history as a roller coaster engineer. His contribution to the science was the creation of the looping, gravity force type of coaster.

Beecher was born in Byron, N.Y. in 1841. He was a lieutenant in the Union army during the civil war. He was an inventor and among his creations were the flangeless railway system, the Monorailway and the acoustic phone, a predecessor of the mobile phone. In between inventions he held a number jobs that included working in the railroad business in Tennessee and the orange industry in Florida.

Beecher’s signature creation was the Flip Flop Railway, a circular vertical loop coaster that Beecher sold to Paul Boyton to be moved to Sea Lion Park in Coney Island. Beecher had initially tested the coaster with sand bags and then with monkeys before trying it out on human beings. There were no seatbelts on Beecher’s coaster, you were held in your seat by gravity alone. The Flip Flop Railway lasted a few years at Sea Lion Park. There are no reports of anyone completely falling out of their seat but there were lots of complaints about whiplash due to the g-force generated. 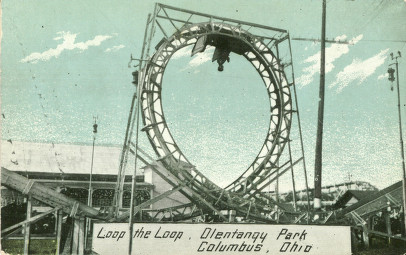 Beecher modified his design and built a Loop the Loop coaster for Olentangy Park in Columbus, Ohio. He built this one out of steel rather than wood and the loop was elliptical rather than circular. While seemingly less dangerous than its Coney Island ancestor, the riders weren’t buying it. The Loop the Loop had a short life before being taken out of services.

Beecher gave it one more try. He built a looping coaster for the Pan-American Exposition in Buffalo, N.Y., in 1901. Fair organizers, however, deemed it too dangerous and refused to allow it on the grounds.

Little information is available about Beecher after that. He died in 1915 at age 75. His concept of the looping roller coaster obviously lived on, albeit with seatbelts and some neck protection.

17 Responses to American Pioneers of Amusement, Part 2: The Fearless Frogman, a Collector of Human Oddities and a Roller Coaster Engineer