Do our public officials vote based on their conscience? Or do they bend with the tides, an eye on their next exposure to the electorate? Or maybe they are motivated by providing some ROI for their biggest donors.

It is hard to say when hypocrisy began to play a role in the American democracy but one suspects it was pretty early on. Clearly it is alive and well today. Consider the Western Pennsylvania congressman who campaigned as a pro-lifer until his former mistress went public with his entreaties to her to have an abortion.

Prohibition was high time for hypocrisy, in Washington, in state houses and in city halls. There was, in the words of Last Call author Daniel Okrent “a large and liquid gulf between how people voted and how they drank.” It was a time for voting dry, but living wet.

Starting at the top, Warren Harding was President when Prohibition went into effect. The Harding Administration is renowned for rampant corruption. The President himself may have been more a victim of bad judgement rather than an outright crook. And that bad judgement applied to more than just filling his administration with scoundrels and shysters. This is a guy who brought his 20-year-old lover into the White House and made love to her in a broom closet. So it’s not surprising that he might have slipped a bottle or two of contraband into the Presidential home. 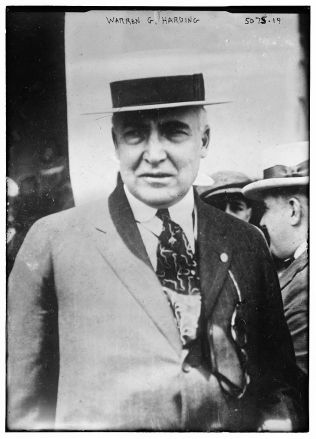 Harding was a drinker. Scotch and soda was his preferred inebriant and he reportedly had some stock in a beermaker. He campaigned for Prohibition when he ran for the Presidency because that’s where he thought to votes were. In his book Prohibition, Edward Samuel Behr describes what Teddy Roosevelt’s daughter Alice Roosevelt Longworth found when she was invited to the White House for a social event.  “Run of the mill guests were kept downstairs, where they were served fruit juice. Harding’s cronies, and other privileged guests, were invited upstairs where liquor flowed like water.”

It was the Treasury Department that was initially responsible for enforcing Prohibition. Harding’s choice for Secretary of the Treasury, Andrew Mellon, had little use for the new law. Not only was Mellon a drinker but he was part owner of the Old Overholt Rye Distillery.

Herbert Hoover oversaw the last years of Prohibition. He had not been an advocate of the 18th Amendment, but captured the “dry” vote in 1928 when running against the “wet” and Catholic governor of New York Al Smith. Upon assuming the Presidency, he attempted to enforce it by upping the penalties for violations. This from a man who, in his previous job as Secretary of Commerce, was known to have ended each workday with a visit to the Belgian Embassy for cocktails.

Franklin Roosevelt swept into office in 1932 with a platform that included a call for repeal. But earlier in his career, a young FDR as Assistant Secretary of the Navy, supported banning alcohol in that branch of the armed forces. And in 1919, with the 18th Amendment approved but not yet in effect, FDR bought four cases of Old Reserve for his New York apartment.

Twenty-two members of the Senate held seats both in 1919 when the 18th Amendment banning alcohol was approved and in 1932 when the 21st Amendment, repeal, was approved. Seventeen of those 22 voted for both amendments. Did they see the light of day? Or did they see which way the wind was blowing?

One of the strongest voices for Prohibition in the House, Ohio’s Republican Congressman Everett Denison, got caught smuggling wine after a cruise to the West Indies. Pennsylvania Senator Philander K. Know voted for Prohibition. Then, in the time before it went into effect, scored 20 cases of Old Overholt rye whiskey.

Smugglers reported keeping the basements of the Capitol building well stocked. Okrent quotes one senator who claimed that of all the “drys” in the Senate he only knew of three who didn’t drink.

At the state and local level corruption and bribery were rampant. The large-scale bootlegging operations that were prevalent in cities all over America went about their business often with little impediment because they had local officials, police and judges “in their pocket.”

Here are just a few examples I found:

But if there is one person who is held up as an example of someone who was diligent and dedicated to enforcing Prohibition it was Mabel Willebrandt. Known as the First Lady of Law, she was assistant attorney general from 1921 to 1929. During that time, her office prosecuted nearly 50,000 Prohibition cases and she is regarded as being personally responsible for bringing down the famed Cincinnati bootlegger George Remus. She resigned in 1929 after Hoover snubbed her in naming a new Attorney General and went on to represent a company that produced raisin cake, an ingredient used to make wine at home.

The War on Alcohol, Prohibition and the Rise of the American State, Lisa McGirr, 2017.

Last Call: The Rise and Fall of Prohibition, Daniel Okrent, 2010