Guns in America: ‘Well Regulated’ Militias and the Right to Bear Arms

If you ask Americans who own guns why, the most common answer, according to the Pew Research Center is protection. Sixty-seven percent of the gun owners queried by Pew gave that answer. Another 38% cited hunting and 30% sport shooting. (Some gave more than one answer hence the total is more than 100).

None of that was on the mind of James Madison, the founding father most closely associated with the 2nd Amendment, the right to bear arms. Back in 1789, the United States was a confederation of independent states that had banded together to free themselves from an English overlord. The framers of the Constitution were Federalists and anti-Federalists, divided over the issue of how much authority (and muscle) should be placed in the hands of the newly created federal government.

Madison, who is considered the father of the U.S. Constitution, was initially a Federalist, although he was to abandon the Federalist Party in the future. The 2nd amendment was positioned as a states rights issue, a level of protection for individual states and their citizens against the possibility of an over-aggressive or over-assertive federal government. Hence the wording:

“A well regulated Militia, being necessary to the security of a free State, the right of the people to keep and bear Arms, shall not be infringed.”

Most of us at this point in time do not see ourselves banding together with our neighbors and taking on the federal government in a firefight. Yet that idea of a militia has not disappeared the way you might have expected, or hoped. There are still 23 states that maintain separate organizations that are the successors of the state militia. They are now called State Defense Forces and rather than manning the trenches to fight off a federal invasion they are mainly mobilized in the event of a natural disaster.

A scarier group, however, are the militias that have been formed that in fact still think of themselves as a force to stave off the feds. For the most part these are secluded, secretive and extremist, running the gamut from libertarians to white supremacists and Nazis. The South China Morning Post estimates there are 165 of these organizations in the U.S. One example is the group that armed themselves and took possession of a wildlife refuge in Oregon in 2016. They were protesting federal ownership of the land and wanted it turned over to the states. Another product of these anti-government militias was Timothy McVeigh, the Operation Desert Storm veteran who murdered 168 people and injured hundreds more when he bombed an Oklahoma City federal building in 1995. His goal was to incite an uprising against the federal government, McVeigh, a white supremacist, had been involved with militia groups in the Midwest. Likely those militia groups were not what you would call well regulated. But just as likely, they would see themselves as the type of organization that the 2nd Amendment was aiming to protect. 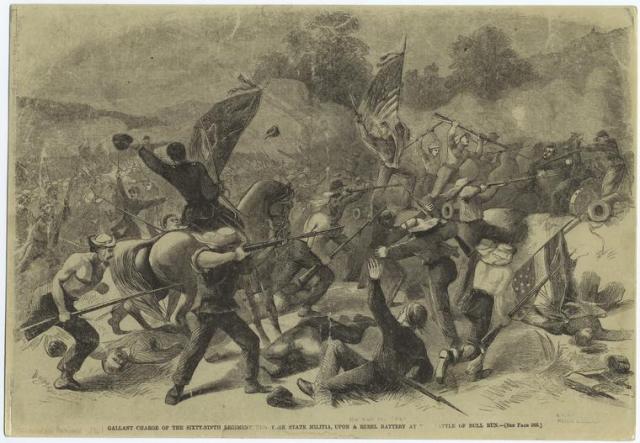 While these militia groups are a lunatic fringe, the question of whether the 2nd Amendment guarantees gun ownership rights for individuals has been a topic of debate in mainstream American politics for a couple of centuries now. Right-wingers and gun-lobby groups like the NRA say yes; gun control groups say no. The Supreme Court says: errrr…. maybe.

There were three cases heard by the Supreme Court in the last quarter of the 19th century in which the court ruled that the 2nd Amendment did not guarantee the individual’s right to bear arms and that individual states were within their rights to regulate gun ownership.  So while the 2nd Amendment was created with states rights in mind, the court was ruling that based on states rights individual states could set controls on guns without being in violation of the constitution. In 1939, the court ruled against an individual who was appealing his arrest for violating the National Firearms Act noting that his possession of a sawed-off shotgun had little to do with preserving “well regulated militias.”

In 2008,  in a case involving the District of Columbia, the court headed in the other direction saying the 2nd Amendment did in fact protect the rights of the individual to own a firearm. The court ruling invalidated a law that forbade handgun possession in the District of  Columbia. In a similar case in 2010 involving a handgun ban in Chicago, the court, by a slim 5-4 vote, ruled that states cannot infringe upon the individual rights granted by the 2nd Amendment.

The 2nd Amendment is a one of a kind law. Only two other countries, Mexico and Guatemala, address the issue of the right to bear arms in their constitutons. And those laws come with much more restrictive clauses. Mexicans can buy guns, but they can’t buy military weapons and they are restricted in being able to carry weapons into “inhabited places.” In Guatemala, government approval is required to buy a gun and there are restrictions in how much ammunition you can own. Six other countries, Bolivia, Costa Rica, Colombia, Honduras, Nicaragua and Liberia, once had gun ownership rights in their constitutions, but they have all since thought better of it.

While you can debate the intent of the 2nd Amendment to the U.S. Constitution, I don’t think any of our founding fathers would have been interested in protecting the rights of the guy who brought more than 20 rifles and a revolver into his Las Vegas hotel room and fired some 1,100 rounds at concert goers killing 58 of them. Nor would they have wanted to protect  the rights of the guy who used a semi-automatic rifle and revolver to kill 49 people at a nightclub in Orlando, nor the two murderers who brought four guns into Columbine High School and killed 12 of their fellow students.

Yet, citing the 2nd Amendment, our federal government has chosen not to implement any of the restrictions that are in place in virtually every other country in the world. And as a result our record of mass killings and gun violence is pretty much unparalleled.

10 Responses to Guns in America: ‘Well Regulated’ Militias and the Right to Bear Arms