I attend a fair amount of sporting events. Thus from time to time I am handed a t-shirt as I walk through the turnstile. This year I got two especially ugly ones. Both came from teams that use the name Pirates. Which one’s worse? You decide. 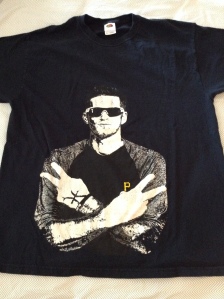 First of all let me say that if you’re going to a baseball game you can’t do much better than Pittsburgh. TripAdvisor rated PNC Park #1. The stadium is in a beautiful setting and there is a great atmosphere both inside and ouside the ballpark. And the Pirates now have an exciting team to watch. But what were they thinking when they made this t-shirt? At first I thought it was Vanilla Ice on the front. But that’s the Pirates 2013 ace pitcher AJ Burnett. Of course after about 20,000 of these babies were circulated AJ had to leave town and is now a member of the Philadelphia Phillies.

These have not been the best of times for Seton Hall University basketball. The team usually squeezes out a record that is close to 500 but that is only because of the cakecake infused early season schedule. What makes matters worse for these Pirates is that they play in a major league facility, the Prudential Center in Newark. If you play in an arena like that in the Northeast your attendence goes up and down with your won-loss record and beating Pitchfork State in November doesn’t count. So how do you boost attendence until such time as they put together a good basketball team. Time to turn to marketing. So one snowy night in January, as the next-to-last place team in the Big East, Seton Hall, was hosting the last place team, Butler, the marketers held a promotion to brand the SHU student section. In honor of this new branding, the Bluebeard Army (since they’re marketers they probably spelled it with two capital B’s), we were all given pathetic looking styrofoam blue beards and one of these t-shirts was draped across the back of each seat. Since only about a third of the arena was full, as you can imagine, some folks went home with armfuls of these prizes.

I got one other giveway t-shirt in the past year. It was from the Red Bulls, but since it was a nice quality adidas t-shirt with a decent design it doesn’t belong in this competition.

Like Loading...
This entry was posted in Sports and tagged baseball, basketball, marketing, sports, t-shirts. Bookmark the permalink.